Home » Emotive Storytelling: We Are What We Speak 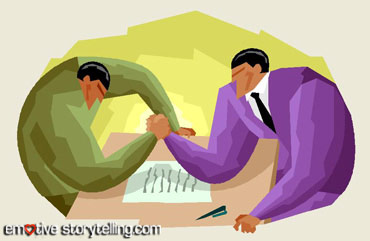 To win hearts and minds, it might help to meet the “other guys” somewhere in the middle.

Is it safe yet to talk about Trayvon Martin? Will it ever be? In the aftermath of the shooting—and even more so after the trial and not guilty verdict—the social media and blogosphere were ablaze with angry rhetoric and rebuttals.

Two opposing camps quickly established themselves, each with its own story to tell.

One story portrayed Trayvon Martin as an innocent child, walking home after buying some candy. In this version, George Zimmerman was a vigilante on the hunt. The other story told a tale of Martin as a suspicious young man, out of place in a neighborhood that had seen an increase in vandalism. In this telling, Zimmerman was a man trying to protect his neighbors and their property.

As usual, both stories probably missed the truth. This is an excellent example of how we, as a species, seem to be designed to automatically fill in the blanks, create full stories and complete a narrative when only a few facts are actually known.

It’s safe to say that neither story has access to all of the facts. Indeed, in the most vehement arguments, both sides integrate the few facts that are available into their preferred narrative.  It’s not unlike a Rorschach inkblot where a story is all about the storyteller, and little about the underlying stimulus to the story.

This is one of the problems associated with the power of stories. Everyone  can be so committed to their story that they can hear no other.

Before engaging in any issue, particularly one as contentious as this, it’s worth considering that our own perspective is simply our story, in which we are filling in the gaps to create a narrative that makes us comfortable. We need to know that our stories will evoke thoughts and emotions  in our audience, just as their stories do in us.

That, after all, is the power of an emotive story. Once we are convinced of the “truth” of our story and the preposterous nature of the stories that are at odds with ours, it is easy to understand why in these cases, there will be no winning an argument.

Part of the strength of any society is that they tell the same stories.  Historically, societies have been identified and defined by the values and beliefs imparted by their commonly told stories. The take away is this:  Stories that stir the emotions are so powerful that when they diverge around important values and beliefs, there will be schisms that are difficult to heal.

Stories About Nothing
Healing Stories from Survivors and Warriors #2

2 Responses to Emotive Storytelling: We Are What We Speak