Home » Stories About Nothing 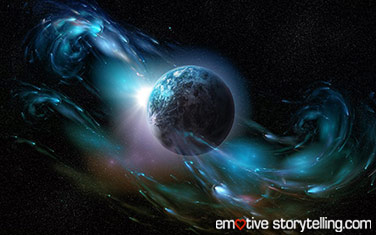 Nature abhors a vacuum and so do we.

Nature abhors a vacuum and so do we. Nature filled the original void with stars, planets and galaxies. When we encounter a gap in our knowledge, we tend to fill it with stories. Not surprisingly, our most enduring stories focus on the origins of our universe—and ourselves.

Most religions include a creation story—the most familiar, of course, being “In the beginning, God created the heavens and the earth.”

This story, or a version of it, is common to Judaism, Christianity and Islam. There’s much more to Genesis, but the details are fairly clear and easy to pass down. God makes man. Cain kills Abel. There is a great flood.

Compare that story—and its staying power—to the scientific (or non-theistic) version, roughly paraphrased from Steven Hawking and George Ellis who authored The Large Scale Structure of Space-Time: Extrapolating backwards to some finite time in the past, the universe was infinitely hot and infinitely dense. Then it exploded. That story is consistent with observed fact but even the most devoted cosmologist might have to suppress a yawn.

Which story are you going to remember? More people believe Genesis than accept the big bang. (Though whether they believe it as allegory or literal fact is another question—and likely a contentious debate.) But Genesis prevails because it’s a compelling story. It’s personal. It sticks. 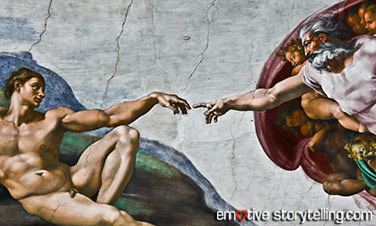 Or take the creation of man. In Genesis, the story takes a few sentences. Darwin required two books and a long ocean voyage to propose his theory. The theory of evolution has become the unifying force of the study of biology, from molecular genetics to ecology. It influences fields from psychology to linguistics. It provides a logical framework through which to view history and humanity. And again, the Biblical story “wins.”

The problem non-theism faces is that by its very definition, it lacks stories. Darwin’s explanation may be logical and elegant, but mythic it’s not. Individual scientists or existentialists may have had tough childhoods or overcome hardships, but it’s all nothing compared to forty days in the desert. At its core, atheism is a story about nothing—really not a story at all, but a logical argument and an appeal to our cognitive mind. And as such, it loses out to our hearts and our guts. We want to believe.

Apologists from both camps can accept the non-theistic version of events—the big bang and evolution and all that proceeds from there—by adopting agnosticism. It posits the possibility of God without denying science or observed fact. It can accept Biblical stories and other myths on face value: early stories told to explain inexplicable mysteries. Stories told in a language that the people understood at the time and clad in era-appropriate cultural detail. Agnosticism doesn’t deny the existence of a higher being—or beings—but it doesn’t expect proof either way. (Moreover, even the most current iterations of the non-theistic creation stories don’t tell us what caused the big bang, or the precise moment that complex organic molecules became living entities.)

In a very real sense, by rejecting literal theist explanations as well as scientific absolutism, agnosticism admits all possibilities. And it leaves us free to ponder all stories equally. As a favorite Agnostic phrase states: Questions open doors, answers close them.

A story about nothing.

Note: It is possible to tell—and even sell—a story about nothing. Seinfeld ran from 1989 until 1998. Although the show proudly billed itself as “a show about nothing,” NBC is reported to have offered the star $5 million per episode to do one additional season. But that kind of lightning is unlikely to strike twice.

As for the rest of us… if you want to have something, better have a story.